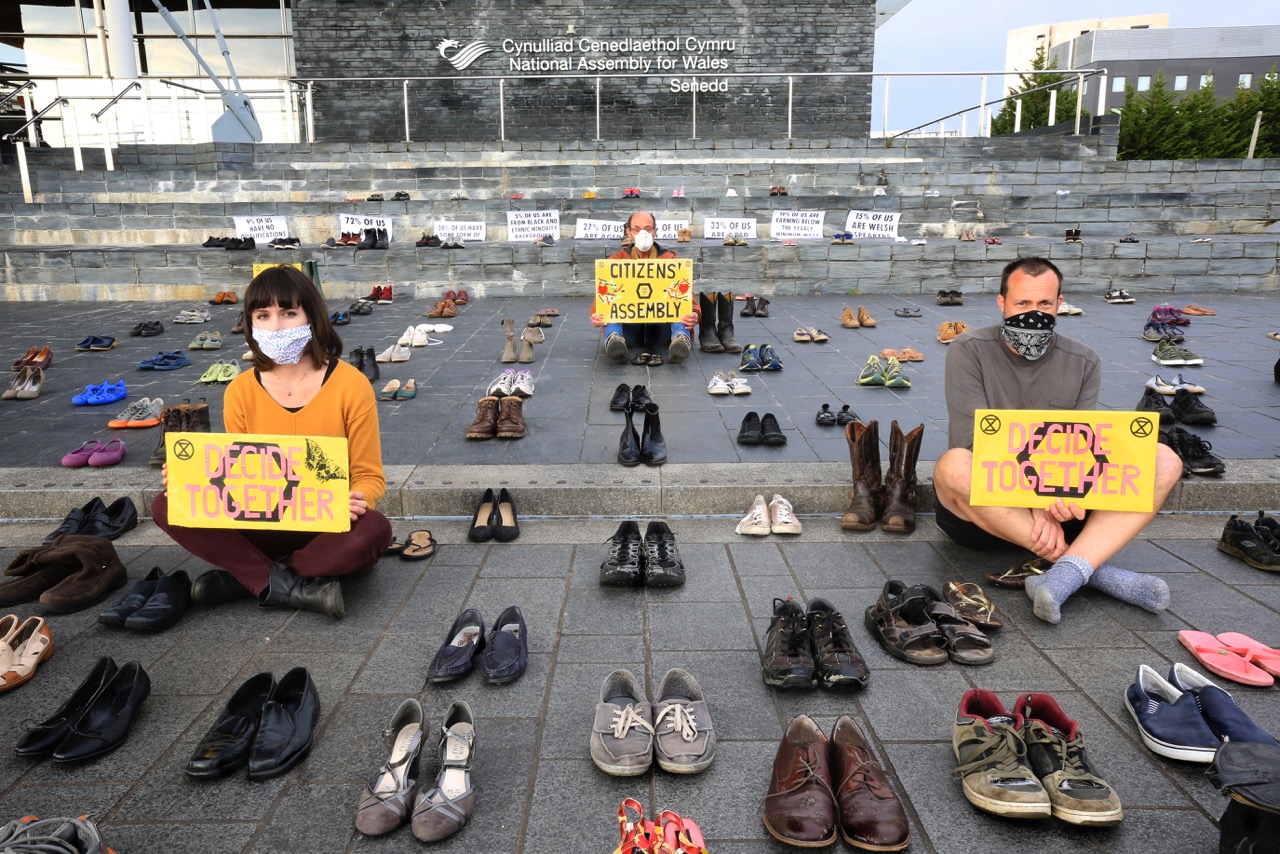 XRCymru call for a Citizens’ Assembly outside the Senedd

Cardiff Extinction Rebellion demonstrated outside the Senedd on Monday 8th June to highlight the lack of opportunities for citizens of Wales to participate in the COVID-19 recovery process.

In a socially distant demonstration, 150 pairs of shoes were placed outside the Senedd to symbolise numbers required for a citizens’ assembly*, which Extinction Rebellion say would enable the people of Wales to have their say in the nation’s recovery from the pandemic.

Extinction Rebellion Cymru is demanding Welsh politicians make a commitment to citizens’ assemblies, to help Welsh Government address the process of social, environmental and economic recovery from the pandemic.

In April, Welsh Government announced they had invited a panel, which includes ex-Prime Minister Gordon Brown, to advise on the COVID recovery process.

Alice Macintosh of Extinction Rebellion Cymru said: “Welsh Government’s Covid-19 recovery strategy continues to be developed behind closed doors by an external Advisory Panel. The only opportunity provided by the Government for citizens to feed into that process is by a poorly publicised email address. Yet, this pandemic has shown that communities want to continue to work together for a better future. Some sections of Welsh Government are still advocating for a top-down, business-as -usual approach and this will not address the climate and ecological emergency, despite the declaration of such by Welsh Government over a year ago. Extinction Rebellion Cymru calls on all the political parties of Wales to make a commitment to citizens’ assemblies.”

The citizens’ assembly model is used in countries such as Ireland, Poland and Canada and created through a selection process called sortition.

Professor Lorraine Whitmarsh, Director of Centre for Climate Change & Social Transformations (CAST) at Cardiff University, said: “As Welsh Government is considering how to recover from COVID-19, it is vital that they listen to citizens about what sort of recovery they want and how to reach net zero emissions. Research shows that one of the reasons policy-makers have not acted on climate change in the past is because they have not had a clear sense that climate change is important to people. Processes like citizens’ assemblies give voice to the Welsh public in key decisions being taken now and over the coming years that will transform our society and economy. This will help affirm Wales as a world leader in tackling climate change and in placing people at the heart of decision-making.”

Extinction Rebellion Cymru launched their Decide Together campaign on 30th May and continue to protest as people around the world are being severely impacted by the effects of climate change.

In Wales, those living on the coast are particularly vulnerable to rising sea levels, with Fairbourne in North Wales being the first village in the UK to be decommissioned as a result of climate change, as the council can no longer protect the village from the sea.

Katy Fowler, Extinction Rebellion Cymru said: “Experts have warned us for over a decade that climate change and ecosystem destruction would lead to the spread of disease and global pandemics. Now with Covid-19 we can really see how important our health and food systems are.

“Last year the National Assembly Commission initiated the first citizens’ assembly in Wales to ask 50 citizens how they could shape their future. 71% of those thought that regular citizens’ assemblies should “definitely be available”. We call on Welsh Government to heed their own findings and be advised by citizens instead of the ‘external advisory group’ that has a vested interest in business as usual. It’s our planet, our health, our chance to rebuild in a more democratic way that will secure a safe and healthy future for all of Wales”

Members of the public can send their views on the COVID-19 recovery process and citizens’ assemblies to: ourfuturewales@gov.wales

Further information about the Decide Together campaign can be found here: https://xrcymru.wales/a-citizens-assembly-for-wales/

*   A citizens’ assembly is made up of a random, representative sample of around 150 people, who are drawn from all regions of a country, and represent a range of ethnic and socio-economic backgrounds. The government commissions an arms-length body to organize the assembly, appoints experts, and facilitates discussion and deliberation of an issue. It does not replace electoral politics, it sits alongside it – and is adept at addressing seemingly intractable political issues, such as abortion in the Republic of Ireland. 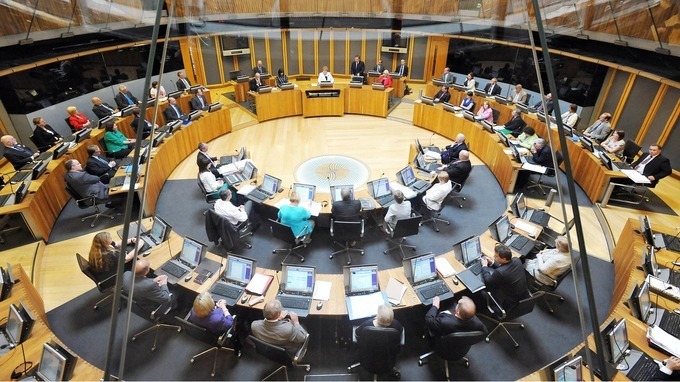 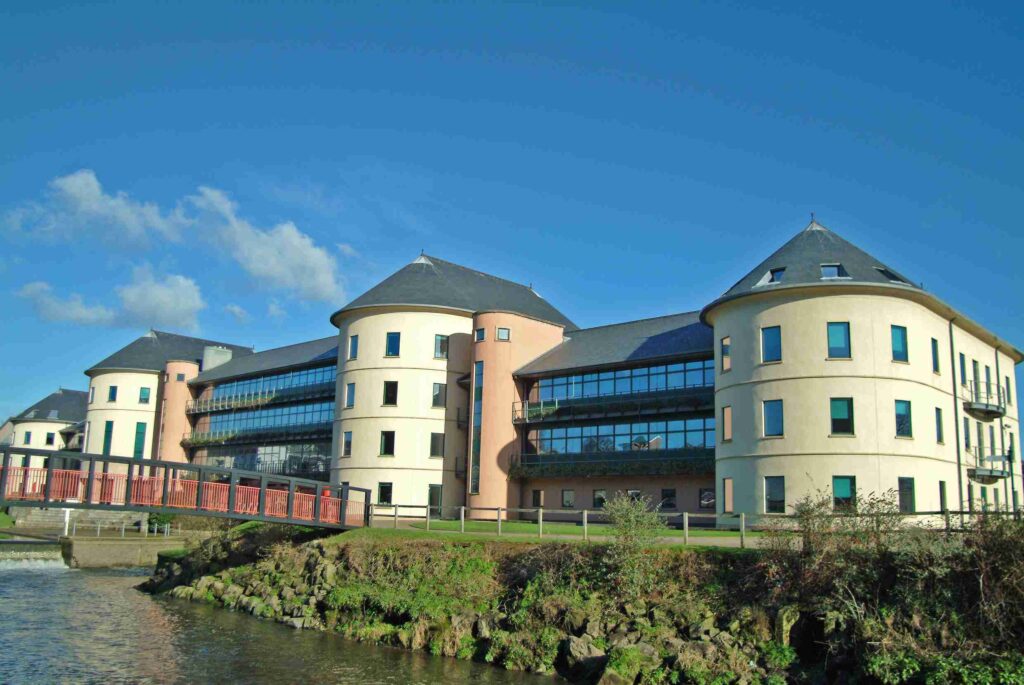 Pembrokeshire County Council carbon reduction plan
16 December 2020
The good news is that the PCC plan was passed by full council on Thursday... 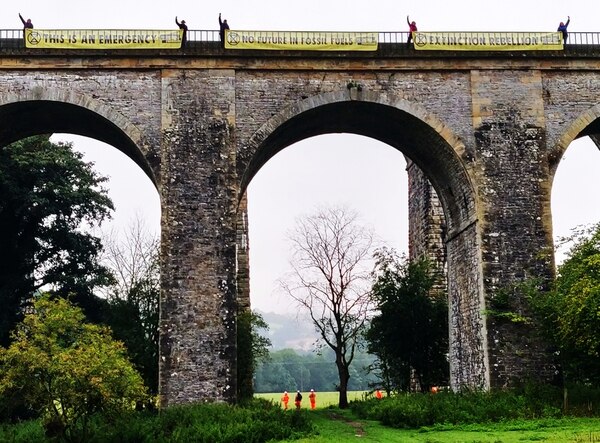 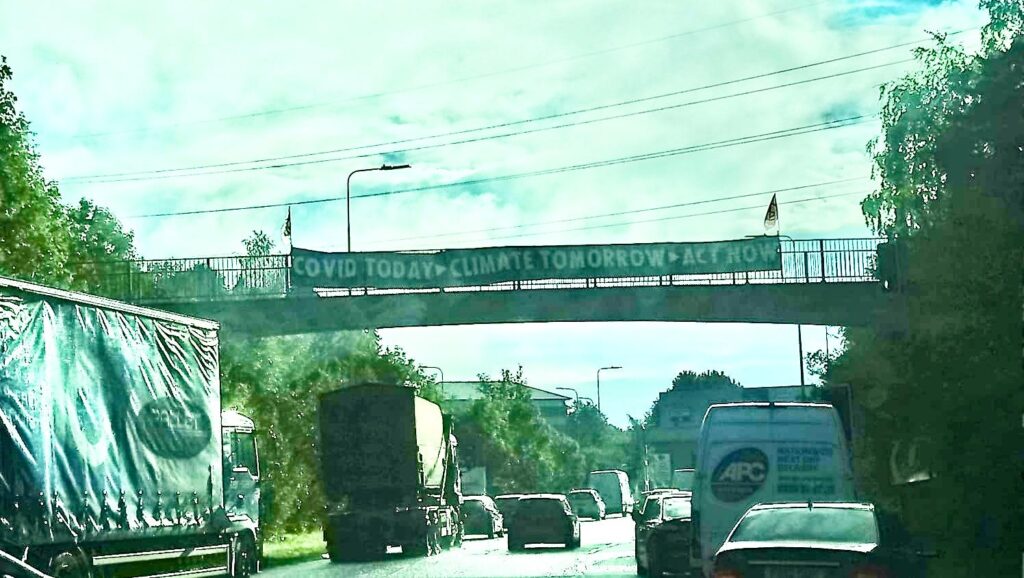 This website uses cookies to improve your experience while you navigate through the website. Out of these cookies, the cookies that are categorized as necessary are stored on your browser as they are essential for the working of basic functionalities of the website. We also use third-party cookies that help us analyze and understand how you use this website. These cookies will be stored in your browser only with your consent. You also have the option to opt-out of these cookies. But opting out of some of these cookies may have an effect on your browsing experience.
Necessary Always Enabled
Necessary cookies are absolutely essential for the website to function properly. This category only includes cookies that ensures basic functionalities and security features of the website. These cookies do not store any personal information.
Non-necessary
Any cookies that may not be particularly necessary for the website to function and is used specifically to collect user personal data via analytics, ads, other embedded contents are termed as non-necessary cookies. It is mandatory to procure user consent prior to running these cookies on your website.
SAVE & ACCEPT
English (UK)
Cymraeg English (UK)